Welcome to a new decade of phenomenal tennis and celebrating 5 years of Ace Advice! I have learned a lot myself within the past 5 years, and I am looking forward to continuing to share my knowledge with you all! My first blog post of the decade is the 1st round matchup in Auckland, New Zealand between the 15 year old Coco Gauff and her 21 year old opponent Viktoria Kuzmova. To start off the year, Coco is 68 in the world and Kuzmova is 56 in the world. Both are young players who are looking to continue their successful runs on the pro tour. They are starting to play with expectations from the public, especially Gauff, who is still only 15 but has been dominating, beating Venus Williams last year in her first ever Grand Slam, and even winning at title at the end of the year. This match is about being steady and having good shot selection, and not wasting any points.

Right from the start, Gauff is very aggressive, finishing the first point of the match at the net. However, the nerves do show as she double faults the very next point. Both players are hitting towards the center of the court, with big margins. The first few games of any match, it is best to hit with bigger margins than usual to get comfortable against your opponent and to get into a good rhythm. Kuzmova is keeping her returns deep, preventing Gauff from stepping in as much as she would like. Kuzmova is showing signs of variety, not allowing Gauff to stay comfortable from the baseline. Gauff is clearly a baseline player, so moving her forwards, either with angles or dropshots, is key for Kuzmova. On the flip side, Gauff a few points later hits a dropshot winner as well. This shows that both players are thinking of how to make their opponents uncomfortable. Gauff is starting to attack Kuzmova’s backhand side once she realized that her backhand side is weaker. After the first few games, you should start to be able to detect patterns from your opponent, such as what they do and don’t like. Both players have big serves, so consistent and deep returns are going to be very important for these two young players in order to get any breaks of serve. An important strategy that both players use well is their ability to change the direction of the ball in cross court rallies. Practicing this in my own game, I have won so many more matches being able to hit down the line first, putting myself on the offensive. Once you are in a cross court rally, after three or four shots, you should hit down the line. Do not be caught hitting right back to your opponent and giving them the opportunity to move you, when you can move them first. In the end, with a break of serve, Gauff wins the first set 6-3.

Gauff won the first set primarily because she was able to break Kuzmova’s serve. This second set, therefore, will be decided by who has a better returning game. The very first game, Gauff breaks Kuzmova’s serve. In addition to returning deep and consistently, Gauff is using more variety than Kuzmova. Every time Gauff hits a short angle or dropshot, Kuzmova does not get low enough, and misses in the net. If Kuzmova wants to get back into this match, she is going to have to get out of her comfort zone and figure out how to get the ball out of Gauff’s strike zone.This could be through lobs, angles, or mixing up the amount of power she is putting on each shot.There were signs of thinking from Kuzmova in the first set with a little variety, but all her variety is gone in the second set. If you continue to put the same amount of power on all of your shots and your opponent does not look uncomfortable, it would be silly to not start to vary the power of your shots. If Gauff likes a hard hitter, maybe start to hit higher to the backhand, or slice a few balls short and low, and see how she reacts. Tennis is a game of strategies, and you cannot win if you are not willing to change your strategy if it is not working. Kuzmova keeps hitting the same type of shots at Gauff, and Gauff is comfortable with it. Therefore, Gauff is winning, and will win unless Kuzmova starts to adjust. On big points, Gauff does a good job of using the body serve, jamming Kuzmova, who is having trouble adjusting to the windy conditions in Auckland. Ultimately, with Kuzmova’s lack of thought in her strategy, and Gauff’s steadiness, Gauff wins the second set 6-1. Make sure you are always thinking on the court! 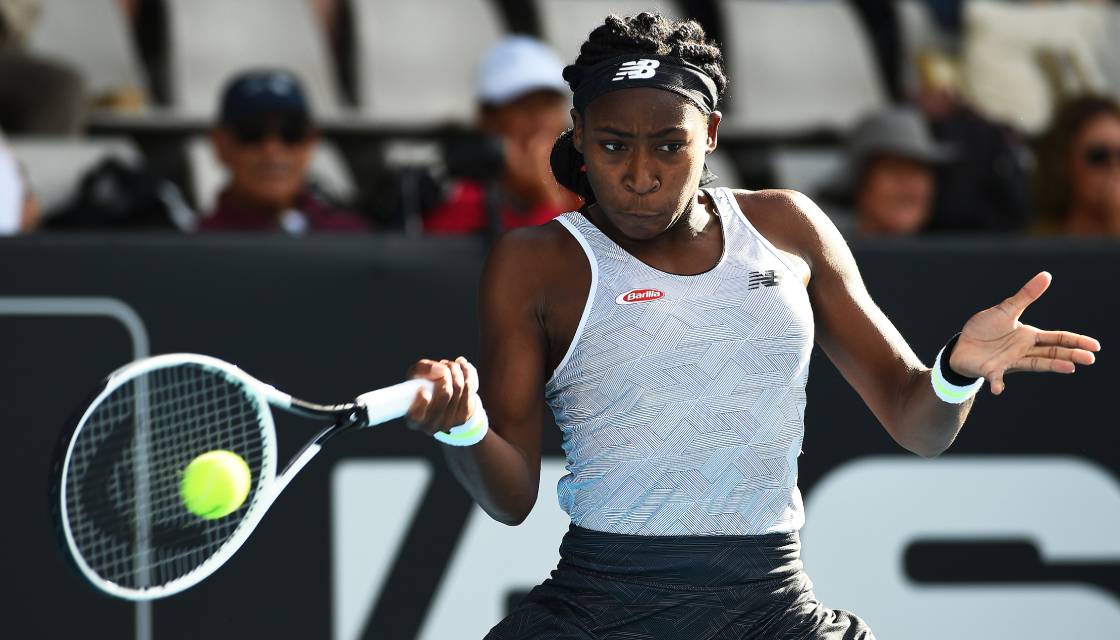