Less than a month after the French Open, the players are now in London playing their 3rd Major of the season. In the 3rd round, Roger Federer faces off against Lucas Pouille on center court. Federer has won 8 Wimbledon titles, and is looking to secure his 9th. Pouille, the 25 year old from France, is looking to pull of a massive upset on one of Federer’s favorite surfaces.

As we all know, Federer has one of the best one handed backhands in history. For Pouille, he has to think about how to play against someone with a one hander.

Even though Federer has one of the best backhands on tour, he still looks to dictate with his forehand. Dictating with your forehand is an essential aspect to an aggressive game. Any ball that is slow moving, or hit to the center of the court, should be taken with a forehand. Hitting as many balls as you possibly can with your forehand helps you stay the aggressor of every point, and it allows you to take control of the rallies.

One-handed backhands are becoming more popular once again for two main reasons. The first reason is that you give yourself more reach on your shots when you only have to reach out with one hand instead of two. The second reason is that you can more easily disguise your slice and approach to the net without changing grips. Having good variety on your backhand side is a great way to not give your opponent the same shot twice. For two handed backhands, it is clear to the opponent when the backhand is going to be a topspin shot and when it is going to be sliced. But for one handed backhands, it is not clear to the opponent when you are going to hit a topspin shot or a slice, giving yourself more of an advantage.

Therefore, in this match, Pouille has to isolate Federer’s backhand while being able to react quickly to any changes in spin. Federer on the other hand will have to dictate with his forehand and use variety on his backhand side.

Both players have great serves, not showing where they are hitting their serve depending on their toss. When your opponent has a great serve, the best type of return is deep and cross court, giving yourself time to recover and start up the point. These types of consistent returns are what will allow both of these players to get breaks of serve.

Federer does a great job of finishing points up at the net, following his ball up and forcing Pouille to go for too much to try and pass him and the net. Following the ball is very important in both singles and doubles. In order to follow the ball in the most efficient way, it is better to approach down the line. When you approach down the line, you follow the ball, forcing your opponent to hit a sharp cross court passing shot as a winner. However, if you approach cross court, you have to follow the ball as well, leading you to have to go a further distance to the net. As you are trying to follow your ball to the net, you are going to have to cross over the middle of the court to get to the other side. This allows your opponent to have more room to hit a passing winner.

Federer does a great job of hitting behind his opponents. When playing against someone who gets to many shots, hitting behind them is a great way to hit a winner and end the point. The typical rally is side to side, so aiming for the same side twice on some of the points keeps your opponent on their toes. However, on some points Federer would hit behind Pouille one too many shots in a row, and he would not hit to the open court. When you hit behind someone, it has to be when your opponent least expects it. If you do it every time, your opponent will start to expect it.

Overall, Federer’s ability to be unpredictable, his unbreakable serve, his athleticism at the net, and his flawless groundstrokes are what allow him to win in straight sets against Pouille. Pouille played a great match, but playing Federer on grass is one of the hardest things to do; it is like playing Rafa on clay. 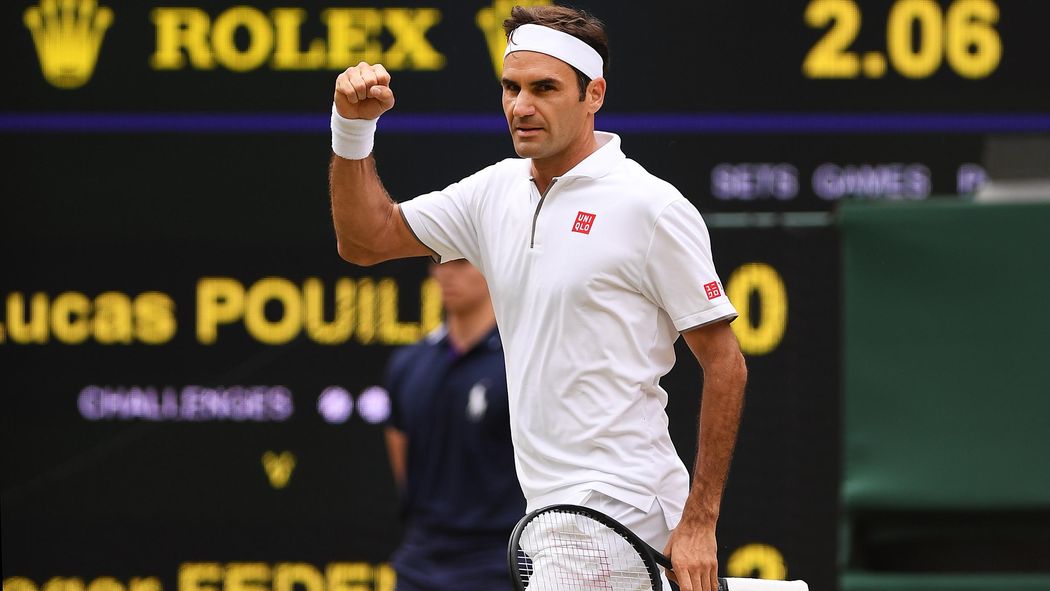